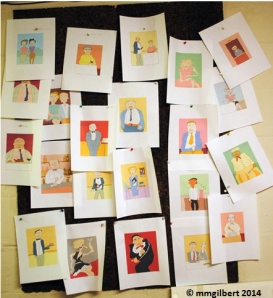 Go crazy with an idea that is fun. Every serious artist I know agrees with that. When I work for my own account, I tend to take one idea and go with it until it runs dry. It can be a kind of obsession. I build stories around the idea and keep coming up with new variations. I recently mentioned how the idea for the “Café of the Dancing Food” was developed. It may have been serendipitous in the beginning – loud construction that made it hard to think and a minor typo in a file label led to the basic idea – but at this moment I have evolved the idea by creating some 20 caricatures, all people who work or eat at a French restaurant called Café of the Dancing Food. It seems to have taken on a life of its own. I put prints of the images I’ve done so far up on a corkboard (pictured above.) I almost certainly have more to do although my time over the next week or so promises to be tight. And I have started to obsess about the personalities being depicted, their experiences, feelings and hopes. Each one is conjuring up stories in my head about them. I get up at night thinking about them. Where will all this end? I am not sure. It may run dry on its own. Or it may be submerged by other priorities. Surfing Maria Popova’s Brain Pickings blog I just came across a book called “Monsters and Legends” by Davide Cali and illustrator Gabriela Giandelli. It is good stuff and apparently is something of a hit. This would be a new thing for me but maybe I should give my French restaurant idea a bit more respect and attention than I have so far. We shall see.