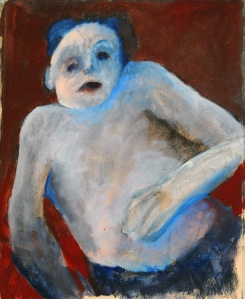 This is some guy lounging outside in mid-town New York City or maybe on a bench in Central Park near 5th and 60th. I don’t recall. I don’t know who he is and he doesn’t look like this, at least not much anyway. And, he definitely did not have his shirt off. The day was relatively warm but not that warm. We have had a cold spring so far. But, I made a quick sketch of him without him catching on and took it back with me. Then, I got a panel out and did a charcoal drawing based on the sketch, sprayed to charcoal with Blair workable fixative, made a couple of additions and gave it one more coat of fix. Then, I painted very thinly, using a dilute solution of Grumbacher Pale Drying Oil. This is an old trick: you paint thinly so that the charcoal under-drawing shows through as rather odd shadows. Was I troubled that the painting bears little or no resemblance to the original model, beyond the overall pose and maybe the way his eyes are set? Not a bit. I prefer a very limited palette: Ultramarine, Venetian Red, Naples Yellow for the case at hand. The brushwork is more reflective of German Expressionism (Beckmann, Kubin, Kirchner, the Blau Ritter gang and all those guys) than anything else. Any time you think that a painting has to be connected to reality, you are asking for trouble. It is not what a painting is. A painting isn’t a copy of reality. It is a reflection of that reality, streamed through and distorted by whatever is in the painter’s head, at least that’s how I think it is. In my case, the reality always goes in one ear and out the other without making much of an impression.

This entry was posted in Uncategorized. Bookmark the permalink.