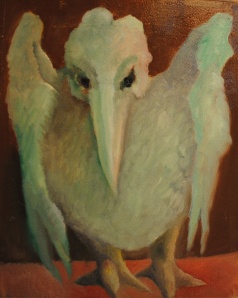 This is from what I am beginning to think of as an ongoing series of paintings, tentatively called “Zombie Paintings.” It started with some left-over paint and a quick painting, done without much “malice aforethought.” Everyone who saw it, though, had a reaction: some laughed; some scratched their head; some just made a face and walked away. Reaction, any reaction, either good or bad, is what you look for in this business. So, I thought maybe I should do some more of what I initially thought was something of a lark. The colors I had used in that original Zombie Painting were Cadmium Orange and Ultramarine which together and separately can be made into some very creepy, brownish-greenish shades. This picture, “Dragon Bird,” is the latest in the series. I added Venetian Red and Permanent Green into the mix. A bunch of friends and colleagues, on seeing it, spontaneously said, “Ah, another zombie painting.” Yes, it is and it looks like it is going to be a series, a group of painting on a common theme that more or less look alike. This one is small, 11 by 14 done on a prepared gesso surface. The gesso is tinted with yellow oxide. Since the picture is thinly painted, that yellow-ish tone shows through.