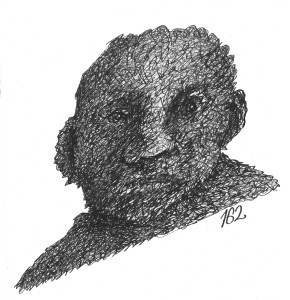 Pen and ink on white paper

I started this last week but didn’t like the way it was going.  So, I put it aside and, this morning, took it up again.  This is as good as it is going to get.  I used to do a lot of pieces like this using a series of increasingly smaller Rapidographs.  The trick is to get some volume out what seem to be an awful lot of random scribbles.  It is a bit different anyway.

Setting a drawing aside when there is no time to finish it or when that drawing doesn’t seem to go anywhere in particular is standard for me.  And, when I say set aside, it can mean a length of time up to a year or in a few instances, even longer.  So, I guess the rule should be, don’t throw stuff out or rip it up in frustration.  Just let it sit awhile until you or it gets better with time.
Oh, about the elevator.  He and I shared one for a few minutes but his face stuck in my mind.  He is a short man and he just glared.  I was glad when he got off.  The 162 refers to its page number in a large sketch book.