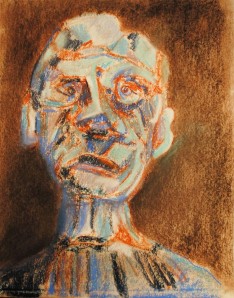 This is one of a large number of portraits of people that I know, have met or seen in one place or another (subway, museum, Madison Square Park, supermarket, etc.). This is nothing new; I recall a story about Mr. Bounarroti who saw a madman on the street and ran home to draw the man’s face.  For me the idea is to explore the human face, that being one of the most complex, meaningful and otherwise highly charged set of visual “signals” for human beings. The idea that no two faces are alike, given the large number of people wandering around and the limited number of “element” on a human face (nose, ears, eyes, mouth, etc.), is a thought hard to grasp.  And, I am told by doctors that our insides are about as individual as our outside.  Anyway, this work is 14 x 17 inches and from a notebook begun in 2009 called “Feral” (for reasons that now escape me).  It is pretty much all faces or faces and upper torsos.    I started with conte stick and then started adding blue tones for what turned out to be a rather curious effect.  Never done that before.  Mix it up is a good idea.

This entry was posted in Uncategorized. Bookmark the permalink.